The onset of the CV-19 pandemic and the serious disruption it has created has been even more acute for the G3 teams in Afghanistan. We have some 337 personnel from 25 nations deployed across the four main NATO bases (Herat, Kabul, Kandahar & Mas e-Sharif): due the combination of global travel restrictions and varying degrees of lock down in people’s home nations, they have seen their leave cycles stopped and life on base severely restricted.

Despite this, they have continued to maintain their high standards of professionalism and performance delivery; even finding time to join in the weekly applause for the UK NHS. We continue to do what we can to manage the situation and support our colleagues. This has included sending out welfare packages to the team and we are delighted that Dike and Son, a local independent supermarket chain saw fit to help us by providing items for inclusion in the packages. Our Operations Director Nick Broom collected the packages from the Stalbridge store himself and as we speak the packages are arriving at the bases in Afghanistan. Our heartfelt thanks to Andy Miles, Assistant Store Manager at Stalbridge and the Dike and Son team for stepping up so generously.

Nick commented: “Having met our teams in person in Afghanistan, I cannot commend them enough and I am personally grateful to each and every one of them for the sacrifices they are making. This is a small gesture that cannot compensate for the impact of CV-19 on their lives, but it is to let them know they are not forgotten and to assure them we will do everything we can to support them through these difficult times..”

NEWS:   Army’s AS90 Turret Trainers combined at one site

The trainer was first introduced in 2005 to allow gun crews to practice their routine firing drills, turret operating procedures and crew duties without the expense of live firing. The system offers the immersion and realism of firing, with a reduced safety risk and a highly reduced operating cost.

The systems were originally manufactured by Van Halteren Defence, with whom we have a long and close business relationship. Since their introduction, our Field Service Engineers (FSEs) have been responsible for the operation and maintenance of the system to support the British Army’s Artillery units in conducting training drills.

Based on a real AS90 turret, the trainer uses an electro-mechanical system to fully replicate a complete firing cycle. This includes the weight and size of the artillery rounds and the noise and turret movement on firing. Since the trainer was introduced thousands of Gunners soldiers have used the equipment. The systems include video playback to analyse training performance.

Previously the two systems were in separate locations in the UK and Germany and they have now been relocated to into a combined facility at the RSA Larkhill, which was officially opened by Commander 1st Artillery Brigade.

It’s good to see the systems back in action and now they are co-located at the RSA they will provide an even better training capability, which we are proud to support.

Recently our hard-working Training Team have been deployed alongside our Royal Engineers customers, helping them to reacquaint themselves with the Deployable Engineering Workshop (DEW). The DEW was designed and delivered by G3 Systems to the Royal Engineers over a decade ago and has delivered sterling service in supporting training across the world and on operations in Afghanistan and the Middle East.

G3 Systems has delivered training to numerous Royal Engineer units across the years. This latest session was successfully delivered to 65 Field Squadron, 35 Engineer Regiment at Kinloss, Scotland in March, before full COVID-19 restrictions were imposed.

On this occasion our team – Chris Lacey, Paul Robson-Rowell, Mike Russell and Ashley Wagstaff – deployed to Kinloss to deliver the established training programme in reverse order, taking the DEW down before rebuilding it to leave the users with a constructed system on completion of training. This was the first-time training had been delivered in this way and was extremely effective.

It was important to deliver this training for 65 Squadron – originally to prepare them for a deployment to carry out construction tasks at BATUS in Canada, but now possibly for them to use DEW on operations closer to home. G3 Systems is, as always, proud of our long association with the Royal Engineers and we wish all Sappers well in meeting the challenges of the COVID-19 pandemic. We also recognise and the professionalism and commitment of our G3 team, who ensured that the training was delivered, even as the COVID-19 situation was becoming more fraught.

We are delighted to announce that Investors in People (IiP) have just awarded us their Silver accreditation. We’ve been committed to IiP for some 6 years as we feel it reflects our commitment to all the members of our G3 Systems family and enables us to benchmark how we look after our people. The Silver award is a great achievement and is something that only 15% of the organisations that IiP assess obtain.

It also reflects the participation of our team in the review process: getting the Silver accreditation has allowed us to confirm what we are doing right, but also where we can improve and keep moving forward. G3 Systems’ HR team is now putting in place an action plan to build on what we learned from the IiP assessment.

To all our G3 colleagues – congratulations on this achievement and your part in it; and thank you for the feedback which will enable us to grow and develop as a team and a business in the future. Well done! 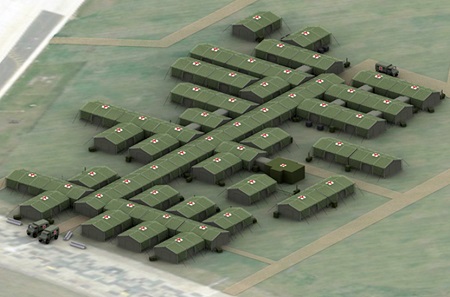 G3 Systems, in partnership with French shelter manufacturer Utilis S.A.S, has recently won a contract to supply the Belgium Ministry of Defence with a modular, deployable Field Hospital. The competition also included bids from Saab and a Dutch-US team of 4 Lutions & Alaska Shelters.The initial procurement, valued at some US$13.2M, will provide a Role 2 Enhanced Field Hospital, comprising some 54 tents, a medical incinerator and medical equipment ranging from stethoscopes to x-ray machines and a telemedicine system. An additional 19 tents were procured to form the basis for a Role 2 Basic Hospital.

G3 Systems will provide the medical equipment and incinerator whilst Utilis will manufacture the tents and provide the supporting infrastructure. Production will commence in June with delivery to be completed by March 2021. All hospital infrastructure and medical equipment will be consolidated and packaged at Utilis’ facility at Ennery, near Metz in north-west France prior to delivery into Belgium. The value of G3 Systems’ share of the initial procurement is US$7.2M. We also expect additional equipment purchases in the future to fit out the 19 shelters for the Role 2 Basic system.

A full set of technical documentation will be compiled by G3 Systems and training will be provided to the Belgian Armed Forces end user.

Following the completion of the initial equipment procurement phase, a 10 year support service will commence. This will see G3 Systems provide a team of deployable, Field Service Engineers (FSEs) to provide maintenance support for the Belgian MOD on training and operational deployments, coupled with routine maintenance, spares provisioning and options for further equipment procurement. The anticipated value to G3 Systems is US$4M, operational and training deployments may see this increase.

G3 Systems’ Capture Manager, Andy Francis said: “We have worked with Utilis on past projects and were delighted to see the team win this tender. G3 Systems’ ability to source and procure the medical equipment for the hospital and our experience of deploying FSEs into hostile operational areas were the capabilities Utilis needed to build the winning team. We are now looking to market this capability to other militaries seeking deployable field hospital capability solutions.” 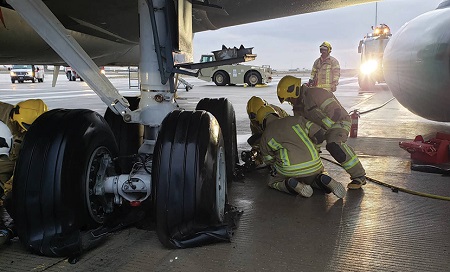 When a Heavy KC 135 blew 8 of its tires at 3:11 on a Saturday morning on a particularly aggressive landing the KAF G3 Emergency Response team were ready to roll. Responding in only 2 minutes the G3 Fire Crews were able to quickly assess the situation, set up incident command and assist in the safe recovery of the plane.

LT Col Kidd of the US Air Force wrote “a few words to express our gratitude for Leon and the entire fire/rescue/crash team for their response and assistance during yesterday morning’s event involving the KC-135 and its 8 blown tires. Our 4 hour 28 minute resolution of the incident was possible because of the professionalism and assistance of your personnel, to include providing hot coffee, tea, and cookies to the additional responders who were working in the cold, wet conditions of yesterday, early morning.” 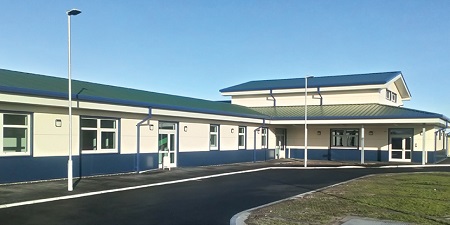 On 27th September 2019 G3 reached an historic milestone with the 18th facility handed over to the DIO in the shape of the Mount Pleasant Primary School on the Falkland Islands.

Started in 2016 the school is a replacement for the existing building at Mount Pleasant that was constructed after the Falklands War ended in 1982.

Now way past its useful service life G3 tendered and won the contract to build the replacement which is a high tech building with ultra-modern facilities throughout including interactive whiteboards in every room and a state-of-the-art building management system controlling the ambient temperature of each of the 5 classrooms all year round.

Come and meet us on Stand C4-401, Millbrook, Bedfordshire.